This week started out simply, with me acclimating to being back in Arizona after being at CSUN. Tuesday evening I was asked to present what I saw and learned at the conference for my AAC course, so I referenced the pictures from the blog from the previous week.

I had some interesting experiences on Wednesday going to Copper Creek to do some observations and interact with an AAC user. I got to ask a lot of questions and it was really interesting seeing the student in action throughout the school day. That evening I met a number of staff and supervisors for an adult day program with numerous AAC users attending. I provided a training for them through Saltillo as an overview to AAC and specifically the Nova Chat and Touchchat devices/programs. I’m excited to go back there and learn more about the adults who use these devices, as well as to follow up on my promise to buy them a pizza if one or more of the AAC users is willing to make the call and order it.

After that I drove to Phoenix for the night in preparation for the ADE ESS Grant Team training the following morning. I was a part of the AAC presentation in the morning, after Ann and Mary did a nice presentation about executive function, They created 15 bins with different types of devices and equipment to help with executive function issues, including Ipads with different programs, visual schedules with and without voice output, and my favorite, a vibrating watch initially created for individuals who are visually impaired. It turned out that the lighting in the hotel was not ideal for the talking visual schedule, so I went around the room with a flashlight when people were ready to use it. We also found that the vibrating watch is not very clear, so pictures of the watch and other styles would help a lot in explaining what it does and the different individuals for who the watch would be ideal for. This is more of a manufacturing issue, but since it is made by an artist who thinks it is very simple to understand (I met her in person, it was an interesting conversation), I don’t think the clarification would come from the company. Anyway, I used that watch at a previous TLC training when someone was talking for far too long, so I used the watch to check the time without appearing tacky and holding my watch up. So it was very interesting and helpful for that alone.

The AAC presentation went very well too, and I was honored to be asked to be a part of it. My role was not specifically defined ahead of time, so we all took turns with the microphone as we went through the slides and I contributed when appropriate. I helped discuss core vocabulary and teaching strategies for AAC. At the very end I tried to mention what to call a student’s AAC device, but that message got a bit confused. What I was trying to say was that people have called their devices by many different names, including Talker and my personal favorite, “Henry”. 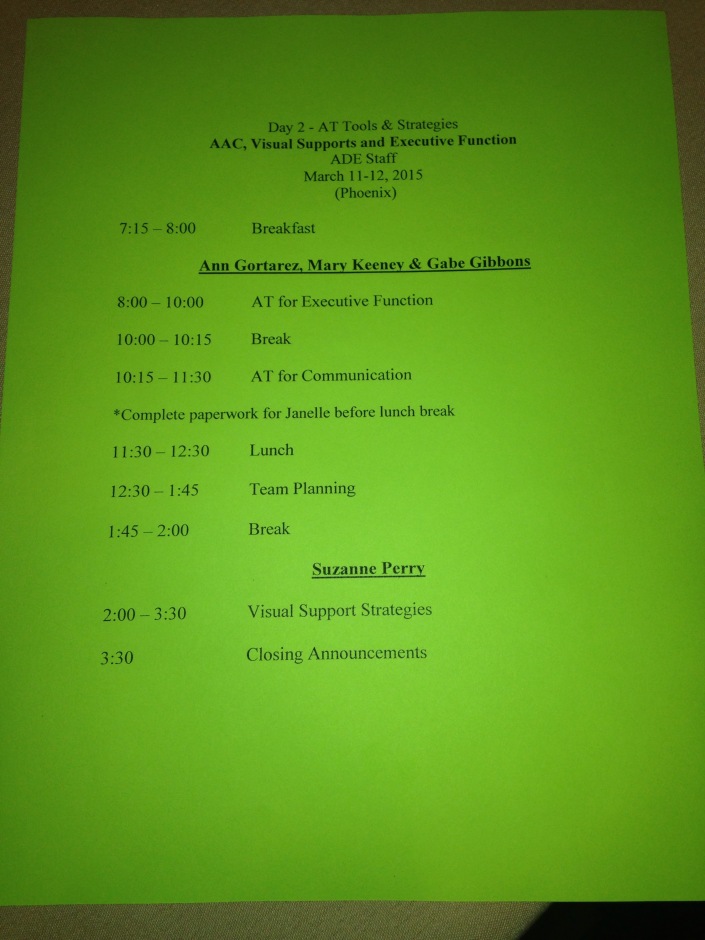 This entry was posted in Arizona Department of Education, Assistive Technology Team Internship.